There’s something special about cooking with a Dutch oven over an open flame underneath a starry sky. The best Dutch ovens for camping are a mixture of traditionalist design and modern quality, allowing any camper to indulge in an age-old cooking process which yields amazing (and tasty) results.

If you truly want to make the camping experience something special and wow friends and family with open-flame cooking which simply tastes different, using a top-quality Dutch oven over a campfire is the only way to go. Those not familiar with using a Dutch oven will be amazed by how simple they are to use, and those who have in the past will fall in love with the latest Dutch oven designs on the market.

If you’re in the market for a great Dutch oven for camping, we’ve got you covered. Below is our definitive list of the 4 Best Dutch Ovens For Camping (And One Key Accessory). We’ve also included a handy FAQ section for those who haven’t used a Dutch oven but are excited to do so!

The Best Dutch Ovens For Camping (And One Key Accessory) 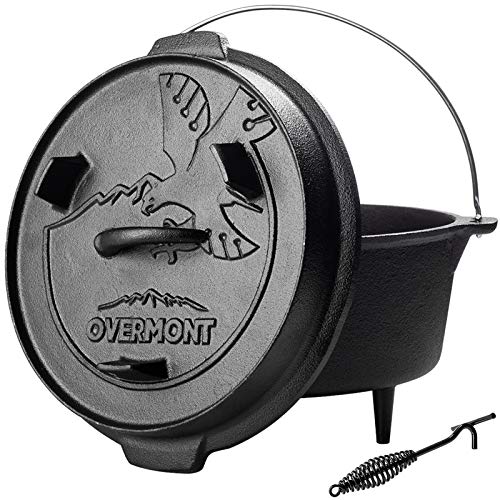 Known as a “lifetime pot” to many of its satisfied customers, the Overmont Camp Dutch Oven comes in two sizes and offers unparalleled durability which only a true cast iron Dutch oven can claim. It’s even a true highlight among other cast iron Dutch ovens. It simply feels sturdier and holds up longer than a majority of the other Dutch ovens for camping on the market today.

One of the most versatile Dutch ovens ever released, the Lodge Deep Camp Dutch Oven is on this list due to its fantastic overall construction and an ingenious flanged lid which can be inverted and used as a griddle! You also get the benefits of the Lodge brand name – a Tennessee-based company who’s been making cast iron Dutch ovens which last a lifetime since 1896! 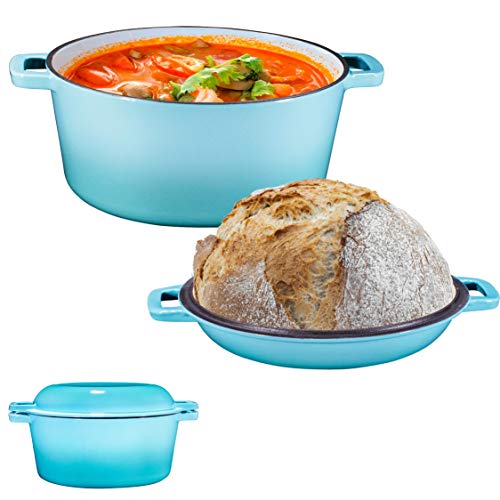 The Bruntmor Pre-Seasoned Cast Iron Double Dutch Oven is simply one of the most well-rounded entries on this list. It’s got real lifetime durability thanks to its powerful cast iron construction, but it also has some added perks including a domed iron cover which makes cooking roasts that much easier and effective. 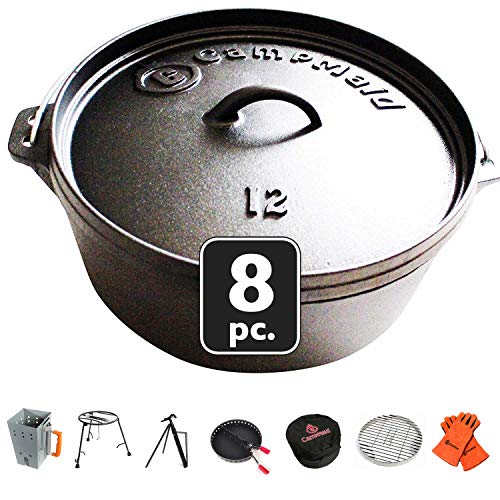 The cast iron Dutch oven alone is as good as it gets, but it’s the other useful goodies in the 8-Piece CampMaid Dutch Oven Tool Set which really make this an incredible bargain for camping and kitchen use! Included are a charcoal holder, a collapsible charcoal chimney, a sturdy Dutch oven stand, a lid lifter, a trivet, some high-quality gloves for handling, and even a carry case for storage or protection while porting! 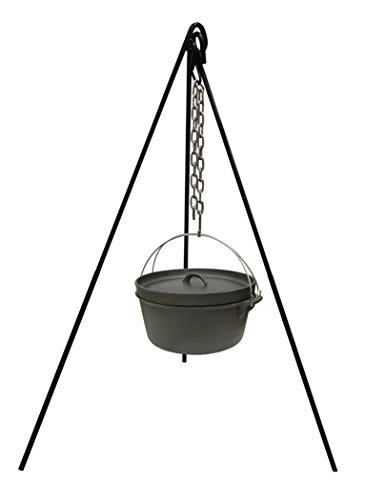 The perfect camping cooking accessory and the best friend for any Dutch oven you plan on using, the Stansport Cast Iron Camping Tripod is a must buy for serious campers with gourmet-level cooking aspirations. Cooking over a raging campfire is made much safer by the sturdiness and overall design of the tripod itself, and the addition of a nickel-plated chain with included “S” hook ups the ease of use quotient considerably!

What are the advantages to cooking with a Dutch oven while camping?

Do you want to go way past the basics of cooking while camping and produce gourmet food worthy of hours spent in a traditional kitchen? A Dutch oven completely alters the equation of outdoors cooking, as their extremely thick walls and even heat distribution make the very most out of open flames.

The new breed of Dutch ovens either come pre-seasoned or are made of hard-anodized aluminum which eliminates the need to season them. That makes maintenance a complete breeze, so you have little to worry about except making showstopping food for your group of hungry campers.

What can be cooked in a Dutch oven?

Do you want to make mind-blowing cornbread and/or a hearty stew to warm your friends and family’s bones on a cold camping night? Are you looking to simmer picture-perfect chili or braise premium cuts of meat evenly and easily every time?

Dutch ovens are a fantastic get either for outdoors cuisine or slow-cooking a wide variety of different dishes in your kitchen.

Soups and sauces come together brilliantly when slow-cooked in a Dutch oven. Fried chicken crisps just right and is juicier than you’ve ever seen when done right in a Dutch oven.

Want to bake some fresh bread and have hours to spare while camping? Just want to quickly boil some water and surprise your camping party with a tasty pasta dish? The possibilities are endless with the best Dutch ovens for camping.

Our list of the four best Dutch ovens for camping (plus one amazing accessory) leaves you with a choice to make. However, you can’t go wrong with any of our listed options when you want to go above and beyond and cook meals both you and your camping party will remember.

Grab one of the Dutch ovens highlighted above and your entire approach to food while camping will change dramatically. There’s a reason why this cooking technique has been a go-to for everyone from gourmet chefs to camping families for centuries – it simply works and works so well. 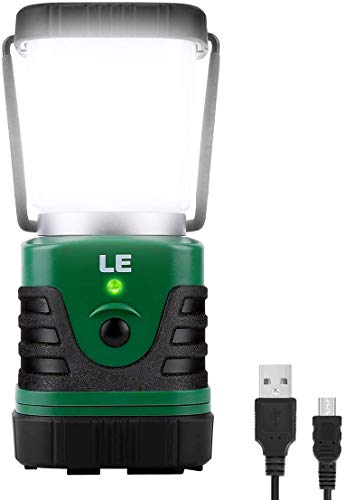 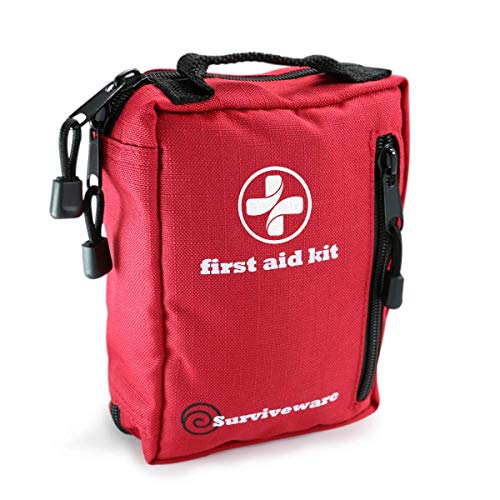 Techie Camper participates in the Amazon Services LLC Associates Program to help pay to keep this site running. Thanks for your support and happy camping!